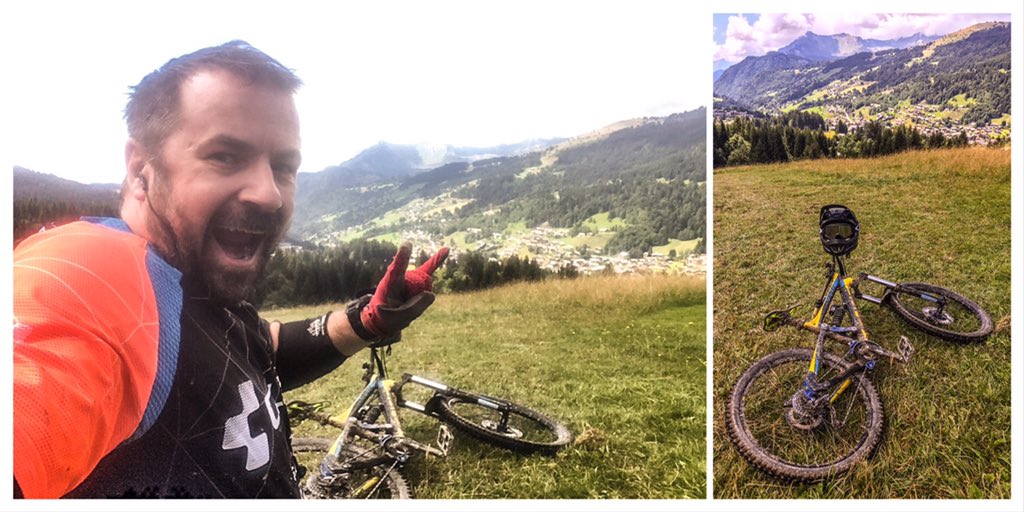 Firstly, my apologies that this entry will be a little image-light: I had a GoPro-free day today, and found it strangely liberating. Right, apologies over, back to the matter in hand.

A much, much better day today. It started with me taking some of my fellow chalet-dwellers out on the Green run – which isn’t a Green by UK standards, and was slicker than the grease from a barbecued brisket. Two days of incessant rain had done the trail no favours at all: we got down with a few spills, but he didn’t do too badly for a beginner eight-year-old!

I put in a few solo laps after that – embracing the filth and slop, finding a few creative lines and generally laying to rest the niggling doubts that had crept in since Thursday’s expletive-ridden crap fest. I then hit the Red Roue Libre trail: weirdly, I find the top half of this trail easier than some of the Blues around here. I’m not sure what it is about it – I think it’s probably because it’s not too steep, but is quite quick and flowly. Well, I say flowy, but in actual fact it’s a braking bump paradise: the damn thing is riddled with them (personally, I think it’s where the lifties bury punters that can’t put their bikes on the chairlift racks). Still, if you can get off the brakes it does flow really well. I even managed some (modest) air, even if it was at the cost of another inner tube (pinch flat this time!) – I really must figure out a way to get this bulk down safely…

A quick run over to Morzine, and a Retour Les Gets spin back along the “Family” Blue. I think that “family” must be the Addams Family, because quite frankly, it was hideous – wheel-swallowing holes and slushier than a Mills & Boon. Once off the Blue things improved though, including some cheeky mini wallrides and a favourite straightline piste descent before rejoining the Red into the centre and back home. The flow is beginning to return, and hopefully by the end of next week I’ll have made a bit more progress!

My chalet host has just given me some good local knowledge about the Super Morzine side, so I think I’ll get a bit of variety next week – I’ll keep you posted!

Oh, and thanks to the Twitterati – I followed local fashion, and wore my Rad8 Glasses with a full face, complete with a Vanessa Paradis/Falco/Plastic Bertrand EuroPop soundtrack! When in France, I guess! (I currently have no plans to remove the peak from my helmet – if I do, please stage an intervention!)